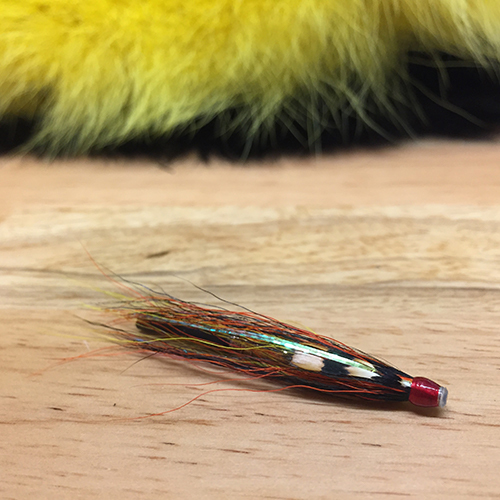 The Willie Gunn is a much-loved fly on the Dee. In the article below, first published in Trout and Salmon magazine, I take a look at the origins of this amazing pattern.

I have featured a number of patterns I know are close to our hearts as salmon fishers.  I am going to take a punt this month and contend that of all the flies of the past 50 years the Willie Gunn must be on most people’s short list of favourites.  I don’t mean the best fly, instead, I would argue that it is perhaps the best loved; the tens of thousands of salmon it has caught has helped the love, no doubt.  The Willie Gunn, it seems to me, transcends mere catch statistics and in my experience anglers have a fond regard for this pattern as one of the few constants in their ever changing fly boxes.  To me, the Willie Gun symbolises spring fishing in Scotland.  The beauty of the pattern is that varying the quantities of the colours can produce a fly that would be equally at home in the dark waters of Thurso and the crystal clear waters of the Dee.  It is highly versatile and can be fished as a tiny summer fly up to the biggest of tubes.

The original method for tying the wing is to blend the colours before tying them in.  I like to add it in separate layers, I think it looks better and I note from Stan Headley’s Flies of Scotland that this was Rob Wilson’s method of making the wing.  I also like to dress them long – for example, an inch and a half tube would have a dressing of about 3”.  The gold bodied Willie Gunn is a popular variant, it could well be more popular than the original dressing.  I tie this version with a red head, I also like flash in the wing.  It is quite a contrast to the standard dressing which is a more sombre offering.

As you know by now I like getting the story behind the patterns I feature so I was more than intrigued when Jim MacKenzie of Ayrshire got in touch with me to shed new light on the story of this great fly.

Willie Gunn was Jim’s uncle and it was Jim that produced the first flies that would give birth to a legend.  In March 1968 Jim was playing around with hairwing flies and had some shanks made for them.  Waddingtons were a bit pricey back then, so Jim and Archie Gilmour, a colleague from Reid Kerr College, produced some shanks of their own on Argonat welding wire.  Jim dressed some flies, with a blended wing of orange yellow and black and a silver rib.  These early versions of the fly, dressed on 1” and 1 ½” shanks, were passed onto Willie during a family visit to the Highlands and were soon catching fish.  Willie was down to the last few of Jim’s flies when he tied one on for the Duchess of Sutherland in the Madman Pool on the Brora and so he called Jim and asked if he could have them copied – and tied on heavier shanks or tubes – at Rob Wilson’s shop in Brora.

So there you go.  A different slant on things from Jim.  The most common version of the history of the Willie Gunn is that Dusty Miller, who tied for Rob Wilson in Brora, produced a number of hairwing tubes.  Dusty was either commissioned to produce hairwings including a Thunder and Lightning or, according to another story I have read, he had come up with a number of flies off his own back and produced them at the shop.  Both accounts tell us that one day Willie Gunn came into the shop, selected the ones that would carry his name and went off to the river and caught several springers. These stories are easily found online and the most interesting ones I have seen were written by Alexander Baird-Keachie, who spoke to both Rob Wilson and Dusty Miller in their later years. You can find these on the Salmon Fishing Forum.

This is the type of story that I particularly enjoy sharing with readers.  I am grateful to Jim for taking the time to get in touch; it has been something he has wanted to get into the open for many years.  I don’t know how or why Jim’s part in the story has been hidden from view, but I am more than happy to shine a light on it now.   I am sure it will stimulate plenty conjecture, but we love all that, don’t we? From Jim’s account, Willie Gunn had fished with the fly, which Jim had originally called Shona’s fly after his daughter before he famously collected Dusty Miller’s version from Rob Wilson’s shop.  Time waits for no one and sadly we no longer have Willie Gunn, Dusty Miller or Rob Wilson with us – we could have started a proper argument.