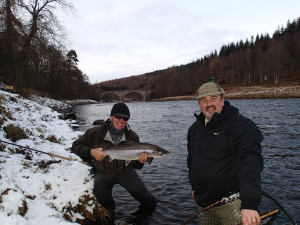 The early months of the season are a special time to be on the river. Conditions can be challenging with low temperatures and gusty, icy winds. The fish at this time are fewer and farther between than any of us would like, but as in so many things, scarcity increases desirability.  If restricted to one fish a season, most of us would wish for an early Springer. The Springers we encounter while the season is still young are salmon at their physical peak; they are solid muscle and have yet to develop any significant deposits of eggs or milt. These are a class apart and are very different fish to even the freshest salmon in August and September.

As the new season gets underway I thought it would be useful to share some tactical insights for early season on the Dee. Successful spring fishers are often the ones able to maintain a positive mind-set; fishing hard and thinking carefully about what they are doing and why. So, how can the spring fisher maximise the chances of success?

With this in mind, I popped down to see Ballogie Head Ghillie Sean Stanton. Sean is a very enthusiastic and thoughtful ghillie who relishes each and every fish his anglers land. Over the years he has kept a record, not only of fish, pool, fly but a more detailed log of time of day temperature and so on. Like all Dee ghillies, he has- or did before the flood changed his pools- an intimate knowledge of his beats at Ballogie. With his usual positive outlook, Sean views the changes as an opportunity to refresh his knowledge of his beats, while enjoying the discovery of each new lie and hot spot.

The ghillies knowledge is a vital ingredient and our anglers’ relationship with our ghillies is often a very close one. Many Dee rods come back to the same beat year after, primarily to catch fish, but also to enjoy the partnership and friendship they have developed with their ghillie.

The most common advice is to fish your fly ‘deep and slow’. It is, of course, sound advice which carries a health warning. For Sean, such advice is most useful if the angler is not constrained by it. If deep and slow isn’t working, do something different. Working from previous experience and the ghillie’s knowledge, many rods will have a 2 rod set up and several at Ballogie will have up to four rods rigged with different lines, tips and flies to reflect the pools to be fished and the prevailing conditions. Each pool has its own unique features- there will be a deep hole somewhere, there may or may not be large subsurface boulders in the neck or an indentation in the tail which is a magnet for fish to rest up. It’s often the creases and seams on the edge of the hard currents where we are most likely to find fish and getting the fly into the correct position is a real skill. By combining tactical flexibility and by working in partnership with the ghillie, rods will maximise their chances of sport.

Sean says “… you can fish any fly you like, as long as it’s a black and yellow!”

Early season fly selection is quite straightforward in Sean’s mind. He tells me, It is also useful to have some big doubles among the tubes. These will have a different action in the water and that may also make a difference”.

Choosing a black and yellow fly doesn’t limit us to just one fly style, rather it is about the best colour combination for the cold, clear waters of the Dee in early season. It almost goes without saying that the fish may have their own perspective on this, but it is safe to say the majority of rods on the river in spring will fish a black and yellow fly with good cause. So, what are our choices? Well, we have the traditional bucktail tubes, such as the Tosh. This fly has accounted for thousands upon thousands of Dee salmon. It is one of those enduring fly patterns that is immune to changes in fashion. Fashions change, of course, and the Dee Monkey and Franc N Snaelda are two other flies which have come to prominence on the river. The Dee Monkey has a huge following throughout Scotland having been designed for the river by Danish angler Jimmi Lauridsen in the mid-noughties. It has a long sinuous wing, originally tied with monkey hair, but more commonly with goat these days. It is of course, black and yellow! Sean’s Franc N Snaelda has also created a buzz in recent years. It is tied in a lot of different colours, but in February it will be, you guessed it, a black and yellow. So, when you are tying or buying some new flies for your first cast on the Dee in 2016 you won’t go far wrong if they are black and yellow, or at a push yellow and black!

Most experienced spring fishers will be well prepared. They arrive at the beat with the correct gear. We all have different tastes, but so long as the gear is suitable to achieve depth and cast a biggish fly then it doesn’t really matter too much if it is shooting heads, multi-tips or skagits. The set up must have a purpose; one of the most common mistakes is for rods arriving with a long belly Spey line and a selection of poly leaders expecting to cast a big Willie Gunn into the teeth of a gale.  If nothing else, it will be a demoralising experience. The range of rods and lines available today means cold water fishing has never been easier and so anglers can concentrate of hooking a fish rather than wrestling with their set up.

Check out FrancNSnaelda for the latest flies, tackle and fly tying materials