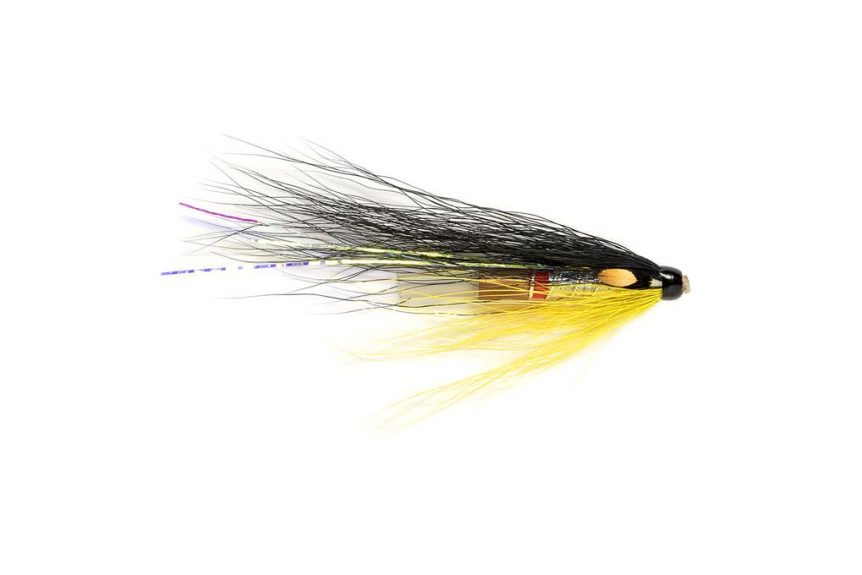 One of the Dee’s most popular flies was born on the Spey and in this article, first published in Trout & Salmon, I look at the origins of this wonderful pattern.

The dressing varies and going by the samples we have of Ned Ritchie’s originals, which were a plain long black wing, it is clear that the Tosh has changed over time and the addition of yellow hair on tubes and hackles on hooks is one such change, as is the use of a rib.

The Tosh is one of the most warmly regarded salmon flies, probably because it is the embodiment of that the most deadly of colour pairings in salmon fishing- black and yellow.  I think it is fair to say that Ned Ritchie’s creation falls into the modern classic bracket along with the Hairy Mary, Stoat and Munros’ Killer; all flies that have spawned a great many modern variations.  Like the Willie Gunn, the Tosh is a spring favourite throughout Scotland and on rivers such as the Spey and the Dee it remains as popular as ever.

In my experience, most anglers are very fond of the Tosh, and its many variations. Just as Hoover became interchangeable with vacuum cleaner, the Tosh has achieved much the same level of brand awareness in relation to black and yellow salmon flies.  My pal Jim Coates father, Geoff, refers to any fly with black and yellow as a Tosh, or ‘kind of a Tosh’. The varieties are legion. There is a hairwing version, dressed on hooks, with a black wing and yellow hackle and many varieties of tube. Other more recent patterns such as The Monkey, that excellent fish catcher, has shades of the Tosh about it while Iain Wilson’s successful Posh Tosh adds some sparkle. There is also a version which is a small plastic tube dressed, sparsely, with the hair from the back of a yellow bucktail. This was much favoured on the Ness and Moriston and in some ways I think this is more in keeping with the original.

I spoke with Mark Melville, Head Ghillie at Delfur on the Spey to find out more about the fly. Delfur is one of the great salmon beats of the world and it was here that Mark’s predecessor Ned Ritchie first tied the Tosh. Ned was Head Ghillie at Delfur for many years. I can’t be exact, but between the late 1930s and 1960s. He also served in the Shanghai Police- which I am certain is a tale all of its own.  Ned has the distinction of landing Delfur’s record fish, which weighed 48lb and was taken from the famous Twa Stanes.

As I wrote previously with regard to the Hairy Mary, these are important examples of the early history of hairwing flies and are to be treasured. As you can see these are dressed on plastic tubes with a wing extending well beyond the hooks. The black hair came from Ned’s dog, Tosh. The patch of yellowish hair is unknown and came later as the fly was originally plain black. Tosh was a lurcher-collie cross; I imagine he was something to behold in full flight, but he wasn’t quick enough to avoid Ned’s scissors. I don’t know for certain why Ned decided to tie the Tosh; one of the anecdotes I picked up was that the idea to tie a fly with dog hair was inspired by a bet in the pub.

The first Tosh flies were unique and in the context of the late 1950s the long wing was a radical development, which has since proved to be of major significance. Other long wing patterns were emerging further north around the same time and I will return to this in a future column.